As a refuge for Christians, Yazidis, and other religious Minorities

Northeast Syria, an area governed by the Autonomous Administration of North and East Syria (AANES) and defended by the Syrian Democratic Forces (SDF), has the best conditions in the Middle East for religious freedom. It is the only place where Christians can openly evangelize and easily build churches.

What AANES has created is remarkable, especially considering that Syria has been in a brutal civil war and was ground zero for the ISIS caliphate. Open Doors has reported that "Christianity is on the verge of disappearing in Iraq and Syria." AANES has provided a stable government and a refuge for Christians, Yazidis and other religious minorities in spite of these conditions.

Unfortunately, Turkey continues to shell civilians and has indicated a desire to invade again.

Patriot Voices President Nadine Maenza has visited NE Syria numerous times, most recently in May. Patriot Voices has joined with Freedom Research Foundation to execute a plan to save this refuge for religious freedom and fight Islamic Fascism. We need your help!

In May, Nadine finished her second term on the U.S. Commission on International Religious Freedom, serving the last year as Chair. Before her term ended, USCIRF held a Congressional Hearing where they documented the extraordinary religious freedom conditions with the AANES as well as the egregious war crimes and persecution in the areas Turkey occupies. Read this article Nadine authored about about the situation in Syria in The National Interest, Victory in Syria Requires Learning from Afghanistan.

Patriot Voices agrees that the U.S. should not police the world or be the financial backer of foreign governments. Fortunately, the Autonomous Administration of North and East Syria (AANES) does not need us to do either of those things. They simply need us to let them survive. They already have the strongest security force in the region and legitimacy with the people. With 80% of the oil and gas in Syria and some of the most fertile land in the Middle East, they can build a robust economy and become self-sufficient if the U.S. maintains its military forces and follows several important recommendations. Fortunately, the U.S. has followed two of USCIRF recommendations, it expanded engagement with AANES and issued a general waiver lifting sanctions on NE Syria. They should also follow these as well:

1) Recognize the AANES as a local legitimate government (not an independent country but a state in a future Syria.

3) Include AANES in the U.N. Res. 2254 process to form a new government for Syria after the Assad Regime.

The benefits of these simple actions will mean the AANES:

Our loses in Afghanistan and other places have taught us:

These actions will require no additional troops or money from the United States. 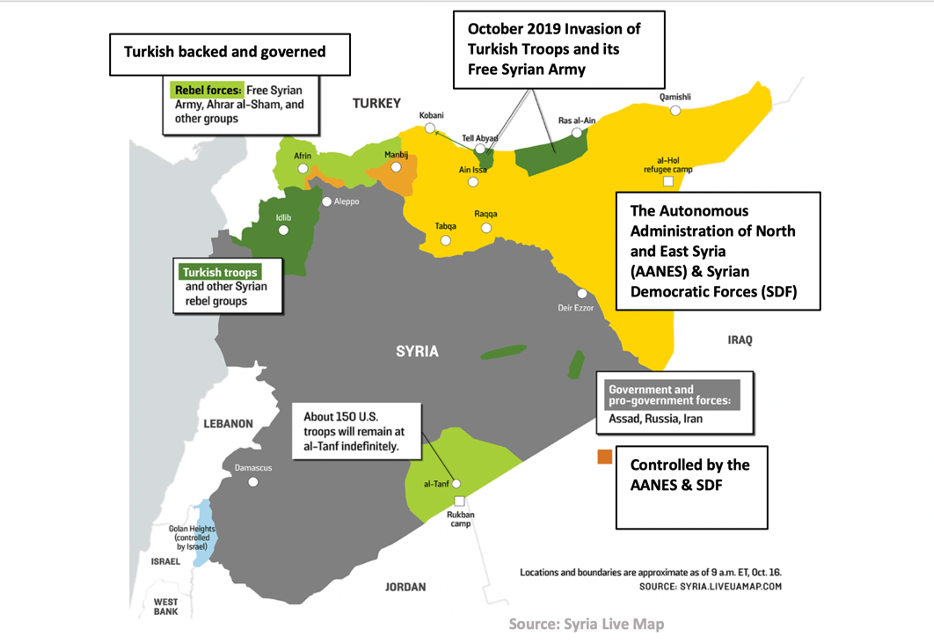 The Severe Consequences If We Don’t Act

If the US removes the remaining troops from bases in Northeast Syria and allows Turkey to enter again, the Autonomous Administration of North and East Syria (AANES) will have to make an impossible choice. It must either make a deal with one of our enemies or enter a brutal war against Turkey. The implications for Christians and other religious minorities are enormous.

The AANES and SDF are the only way to end a forever war here. The governance they have built holds the ground and brings stability. That is why Turkey, Russia, Iran, and China want them eliminated. Allowing them to exist is the only way to stop a  forever war in Syria. If they are eliminated, these countries will fight among themselves for Syria while ISIS rebuilds its caliphate. In the future, the U.S. will likely be drawn into an even bigger war in the Middle East. This time, it will include nation states and the SDF won’t be our boots on the ground like they were in our fight against ISIS.

Don’t Defer to the United Nations

Currently, the U.S. State Department is following the Obama policy of deferring to the United Nations and Resolution 2254 in planning a future Syria that excludes AANES. This process would allow Russia, Iran, Turkey, China, the Assad Regime, and other countries to choose a new government once the Assad Regime falls. The U.S. can easily demand that AANES is part of the United Nations process, which is the only way Christianity and religious freedom will survive in Syria.

Join Patriot Voices by clicking "Send Message" below to send a letter to President Joe Biden and your U.S. Senators and U.S. Representative asking them to support these actions to save the Autonomous Administration of North and East Syria (AANES) – without additional troops or money - which will ensure that Christianity and religious freedom survives in Syria!